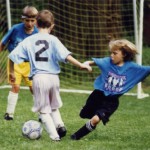 I’m a ‘sit by the sidelines and try to keep up with the action on the field type’ of person.  And usually, I’m in good company.  We’re talking U7 boy’s league here – coaches are parent volunteers.  No tryouts, everyone plays a shift, and they all take turns being goalie.  No stress right?  Well, this year, we have one couple who should have volunteered to be coaches because they obviously know how the game should be played better than everyone else.  During each game they shout out instruction at the kids, “hey, number six, get moving, number 13, don’t let him get past you!”  I know this isn’t a new phenomenon, just an irritating one.  “Man, the coach is mute today, he sure isn’t helping the kids” the mother of the couple remarked a few weeks ago.

Last week, while standing at the ice cream truck, the mother spotted my son’s jersey behind her in line, and started talking about how the kids need to be closer to some line or else they were going to get creamed every game and that was just too much for the kids, they will get upset if they keep losing.  I don’t really know the rules so well, so I’m sure she figured I was just an idiot as I stood looking at her, with a confused look on my face, as much to try to understand what rule she was talking about, and why she was so concerned.

Then this week, the father made his presence known, as he was pacing up and down the sidelines (I say this generously – there are actually no ‘lines’, just a field in a local park.)  “Get the ball, pay attention, why didn’t you kick it!”  It is easy to spot the unfortunate off-spring of this aggressive couple; he’s the one with the miserable look on his face, the one having the least amount of fun.

My incredibly competitive son is in the game to win – he gets upset when they lose, but is often easily appeased by his loss with a chocolate dipped soft serve, topped with sprinkles.  This week, however, he had a great game, he scored three goals, and beaming with joy, ran up to me during half-time and told me he felt magic.  It was like he couldn’t lose.  More importantly, he was having fun, beyond fun actually, he was playing a game he loved and enjoying the thrill of being the ‘MVP’ of the game for his team.  And all I did was cheer and give him the thumbs up each time he raced away from scoring a goal, his fisted hands pumping up into the air.

While the crazy sideline parents were ruining their child’s game, they couldn’t put a damper on my son’s experience.  And really, his joy and continued desire to play is all that I care about.  I guess I can’t be sheltered forever from those loud and aggressive coach-parents forever. 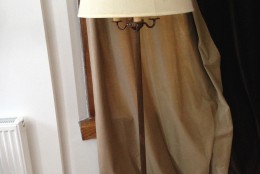 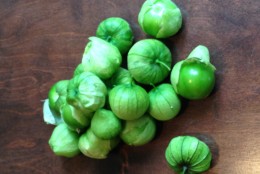 Tomatillos from the Garden