My son is competitive – I beleive this is  a gentic trait (must have skipped a generation).  And Halloween has become a type of contest for him.  He is a child who enjoys candy, but can wait to eat them.  His good friend, who he went out trick or treating with last year, was eager to go out together again this year.  We had to warn her.  Are you sure you want to go together?, I asked her.  Last year, as she was busy chatting with friends on the street, taking time out for a quick sample of her treats, my son forged on, leaving her and her father behind in his quest for candy.

This year, she was prepared. You see, she realized from last year, that with some focus, and the spirit of a marathoner, she too could collect vast amounts of candy.  Last year’s count, for my son was 217.  I don’t doubt that was the number, my kid has a good memory for these things.  So this year, the competition was on.  So, as the streets darkened,  off they went, in search of candy.  And search they did.  After about an hour, they stopped off for a quick pee break and to off load  their spoils.  Then off for another hour.  The last part of the trip (likely premeditated trick or treat route by the fathers) was on a street where the houses are located on a hill – to reach the door and the treat, kids must climb at least 40 steps.  Often the rewards are great, as there are few who dare to scale such heights in search of a mini candy bar.  One place, reportedly gave my son 7 tootsie rolls.  I think he remembered this from last year, because while his friend opted to go to every other house, my son faithful made his way up each and every stairway.

But for all that effort, he was rewarded.  267 pieces of candy.  His joy was matched only by the careful categorization of the treats, competition for which pile laid out carefully side by side would win for the longest. The lollipops had it in the end, but the chips were a front runner until the very end.

In our house, the joy of trick or treating culminating in victory.

My only concern is how to sustain this – certainly there must be a limit.  And don’t get me started on the fact that probably me and my husband will end up eating most of it.  The true joy for my son has already been achieved. 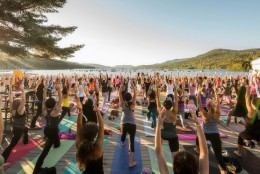 All Those Who Wander are Not Lost